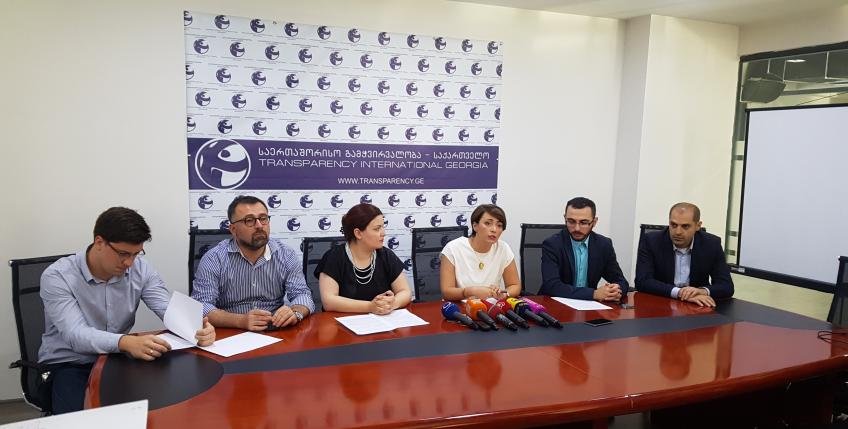 Alert on Deterioration of Democracy in Georgia

We are sending this message on behalf of 30 civil society originations to alert you on some very damaging actions by the ruling political party in Georgia, which does adversely affect the quality of democracy in the country and is a dangerous attempt consolidate political power.

Namely, we are referring to the latest developments in the process of the constitutional reform in Georgia.

The discussion in the Commission was a working process and obviously not all of the civil society proposals have found their way in the final draft of the Constitution.  Neither did we, Georgian CSOs have such an illusion; however, there was one issue - the reform of the electoral system - which was regarded to be the most important one for the civil society and all the political parties in Georgia (except the incumbent). There has been a solid consensus among the major civil society organizations and opposition parties on this issue even before the constitutional reform process started. This recommendation was also strongly supported by the international organizations during the years.

However, none of the parties in power have addressed the calls to change the electoral system, because the existing mixed proportional-majoritarian system traditionally favored a party in power. (It is exactly for this reason how Georgian Dream received over 75% of the Parliament seats, with only 49% of votes.)

The constitutional reform was neither on the public’s agenda or in any way demanded by the public. The only issue with a broad political consensus (except the ruling party) was the need of a reform the electoral system. The Georgian Dream made the promise to change the electoral system into a fairer one by 2020. With that anticipation we, Georgian civil society organizations, entered the Constitutional Commission. Throughout the work of the Commission, we voiced all our recommendations and concerns openly within the Constitutional Commission, as well as via national media and public meetings, and to the Venice Commission, and took all the effort to facilitate constructive, inclusive and consensus-based constitution-making process.

After four months of discussions, clauses reforming the system made it to the final draft of the new Constitution approved by the State Constitutional Commission. The draft version of the Constitutional amendments submitted to the Parliament mandated move from a mixed majoritarian-proportional to a fully proportional system. It also contained certain controversial points, which in a different way granted advantageous position for the ruling party, and CSOs were actively protesting against it. However, we welcomed the main outcome of abolishment of the majoritarian elections for single mandate electoral districts. The draft, in this form, was sent for the legal opinion to the Venice Commission, who shared our (Civil Society’s) positions regarding the electoral system.

Having received the response from the Venice Commission, the ruling party decided to disregard it, but also to neglect the whole process of the work of the Constitutional Commission, to ignore the voice of the civil society and all political parties and, contrary to all expectations and the initial version of the draft, to postpone the changes in the electoral system until 2024 (the general elections following the next one). In other words, having first acknowledged that the existing electoral system needs to be reformed to make it more just and fair, Georgian Dream decided to keep it, despite the promises given out to the public, civil society and all other political parties, irrespective of the several month-long work of the Constitutional Commission, initiated by themselves, and in contradiction to the recommendations of the Venice Commission – and all this, in order to, merely, retain the power.

On June 22-23, amid protests from political parties, civil society organizations and even the President of Georgia, the ruling party passed the legislation with two hearings in two days during an extraordinary session of the Parliament (the Parliament started discussing the draft document in the Parliamentary Committees even before the Venice Commission opinion was published, the text was adopted with the first reading at the Plenary Session on the 22nd  of June; on the 23rd of June the text was adopted with the second hearing by the relevant committee, as well as the Plenary Session on the same day. Both the committee and the plenary went through the whole document article by article, as the second hearing requires, in just one day) Finally, the text was adopted without any opposing voice heard – none of the opposition MPs were present at the session in sign of protest to the quick speed of hearing and decision regarding the electoral system.

Thus, the current ruling party of Georgia, Georgian Dream, adopts the Constitution, which is approved and appreciated by nobody but themselves, without accommodating any important thought, from the civil society, political opposition or expert opinions from abroad.

We assess this as a clear and a straightforward attempt and a step towards the consolidation of power, on yet another – Constitutional – level, which poses grave threat to democracy in Georgia. It is indeed a very unfortunate development in the country – a symptom, which requires immediate attention and a very strong reaction. This is nothing but the realization of our earlier fears on how the Georgian Dream might abuse the Constitutional super-majority in the Parliament. We consider that a Constitution, which is not based on broad consensus, may pose a risk not only to democratic future of Georgia, but also stability of the political process in this country.

We call on you, as a long-standing and strong supporter of Georgian democracy and statehood, to use all powers in your possession to help us mitigate and prevent this very unfavorable developments taking place in Georgia, until the new Constitution is finally passed and approved (the third and the final hearing of the Constitution will be in Autumn). We urge you to deliver very strong messages across to the Government and the Ruling Party in Georgia, that these tendencies and inclinations towards consolidation of power are incompatible to the Western standards of Democracy and thus unacceptable. Also we consider that such behavior from a country which is considered by many as a frontrunner in the post-Soviet as well as eastern-partnership regions establishes a bad precedent for other countries too. In order to avoid further deadlock in Georgia and a negative spill-over of this precedent in the broader region, we strongly encourage you to react now.

We stand ready to provide further information on this process, should you require so.

We very much count on your support.

Institute for Development of Freedom of Information

Center for Welfare and Development

We for Sensible Future

The Charter of Freedom

The Center for Civic Monitoring and Research

The Institute of Democracy